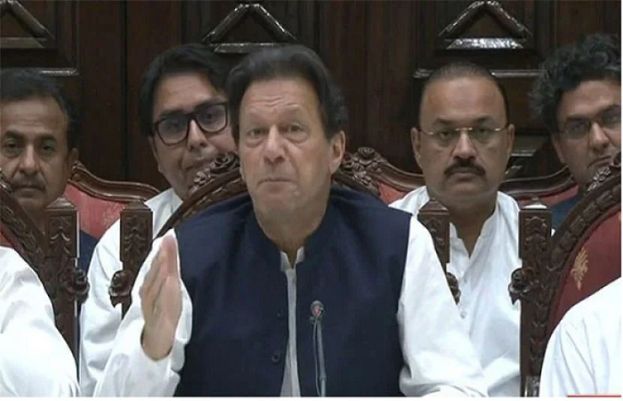 PTI Chairman Imran Khan on Tuesday announced the date for his party’s much-awaited long march and said that it will start on Friday, October 28.
The announcement came while Khan was holding a press conference at the Chief Minister’s House in Lahore, during which he said that the march will start from Lahore’s Liberty Chowk at 11am.
Responding to the allegations levelled against him by his opponents for being “irresponsible” for holding a march when the country was undergoing a crisis, Khan said that when he had taken office as the prime minister of the country, Pakistan was suffering from the “worst economic” situation.
The PTI chief had last week said that he would announce the date by Friday, but the anti-government march will now start on the same day despite repeated government warnings.
The government approached the Supreme Court earlier to stop the PTI’s long march. However, the apex court rejected the request to issue an interim order for stopping the PTI’s planned long march — giving a boost to the Khan-led party.
Before it approached the top court, the government issued repeated warnings to the PTI chief, with a top official saying that the authorities would multiply their May 25 policy by 10 if Khan announces another long march.
If the PTI holds another long march, then it would be the second time they would be coming to Islamabad. The last march was held on May 25 and ended with Khan abruptly calling off the march after reaching Islamabad.