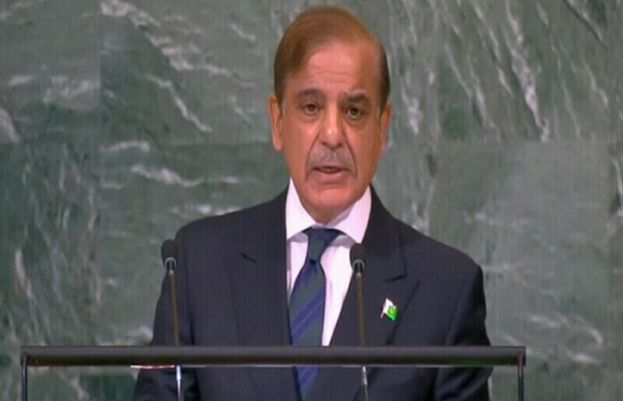 Prime Minister Shehbaz Sharif is addressing the 77th session of the United Nations General Assembly (UNGA) in New York.
At the outset of his speech, the prime minister said he had come to explain firsthand scale and magnitude of the climate catastrophe that has put one third of Pakistan in a situation that no one had seen in living memory.
“Pakistan has never seen this most dark and devastating example of global warming. Life in Pakistan has changed forever,” he noted.
The premier said people in the country were asking for reasons for the destruction caused.
He pointed out that “undeniable truth that calamity has not been triggered by anything we have done”.
Our glaciers are melting fast, our forests are burning, our heatwaves have crossed 360 degree Celsius, thus making us the hottest place on the planet and now we live through an unprecedented monster monsoon, he highlighted.
Earlier in the day, Foreign Minister Bilawal Bhutto Zardari thanked G77 countries for their “generous support” in providing relief to Pakistan during the catastrophic floods as he called on industrialised nations of the world to compensate their developing counterparts for the loss from damage caused by climate change.
He passed these remarks while chairing the G77 Ministerial Meeting of Foreign Affairs on the sidelines of the 77th session of the UNGA.
At the outset of his address, Bilawal said that these were challenging times for the developing countries.
“We have suffered disproportionately from a series of shocks: the Covid-19 pandemic, rising commodity prices, the proliferation of conflicts, and the growing impacts of climate change.
“Our challenges have been exacerbated by a deficit in solidarity from our developed country “partners”, he highlighted, adding that as a consequence the world now faced the triple interlocking crises of food, fuel and finance.
“To overcome these cascading crises, restore our economies and achieve the SDGs [sustainable development goals], we need to secure implementation of a series of emergency measures and simultaneously promote structural changes in the unequal and unjust international economic system.”
Bilawal then outlined emergency actions that could be taken to deal with the situation.
“One, mobilize urgent humanitarian, economic and financial support to the more than 50 developing countries which are in economic distress,” he said. “This implies larger ODA and concessional finance. We welcome the proposal (of the Secretary-General) for a “SDG stimulus” of $500 billion to enable those countries which are in extreme economic distress to revive their economies and development objectives.”
“Secondly, provide emergency food supplies through the WFP to the 250 million people in food distress; further moderate prices by enlarging food production and supplies; and support small farmers access to seeds, fertilizer and finance.”
The third action pointed out by the foreign minister talked about ensuring the availability of energy, especially gas, for developing countries and exploring mechanisms to reduce the financial burden of energy imports.
He also talked about mobilising the universal availability of Covid-19 vaccines and treatments and expanding vaccine production to end the Covid pandemic decisively;
“Five, provide urgent and adequate assistance to countries suffering from the impacts of climate change.”
Citing the floods in Pakistan, Bilawal said that the country emits less than 1 per cent of global greenhouse gas emissions, yet it is now the epicenter of the impacts of climate change.
“One-third of the country — an area the size of the UK — is under water. A thousand people were killed and thousands more injured; thirty-three million have been affected and 6 million are absolutely destitute. 1.7 million homes, over twelve thousand kilometers of roads, 350 bridges and 5 million acres of crops, have been destroyed. The total damage is estimated at over $30 billion, almost 10pc of Pakistan’s GDP.
“The entire Pakistani nation — government, armed forces and common people — has rallied to provide relief to their compatriots in need,” he said.
Subsequently, the minister thanked members of the Group of 77 and China for the “generous support they have provided Pakistan in our relief efforts”.
We are confident that their support will be sustained as Pakistan moves to the daunting task of rehabilitation and reconstruction, he added.
Apart from the immediate measures, Bilawal also suggested long-run goals that were required to achieve the goals of the Paris Agreement.
He started off with the importance of the implementation of the climate change agenda in accordance with the principles of “common but differentiated responsibility”.
“By COP27, we must secure the fulfillment of the pledge by the industrialised countries to provide a $100 billion-plus annually in climate finance, allocate half of this in climate adaptation and establish a financing facility to compensate developing countries for loss in damage from climate impact.”
The minister said the developed countries must assume the burden of mitigation to reach net zero emissions well before 2050. “The international trade system should be restructured to contribute to the achievement of SDGs through export-led growth in developing countries,” he said.
Bilawal pointed out that the induction of a fair international tax regime, including digital trade, was essential for developing countries to mobilise larger domestic resources for development.
“We should negotiate an international technology agreement aligned with SDTs. It should offer preferential access to developing countries to relevant advanced technologies and end discriminatory restrictions.”
The foreign minister highlighted that global research, scientific breakthroughs and development should be focused.
“We should also seek an equitable international information technology regime which bridges the divide and enables the developing countries to leapfrog into the global digital economy of the future.”