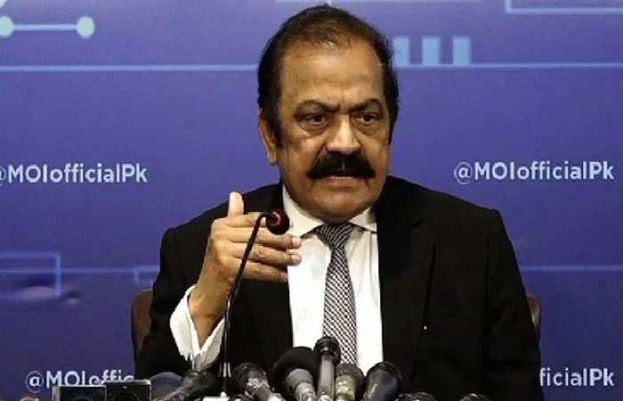 Interior Minister Rana Sanaullah has warned all those provinces that will support the long march of former prime minister Imran Khan of dire consequences, saying it violates the Constitution.
“The Constitution gives power to the federal government and I will ask cabinet and prime minister to use it in case of such a situation,” the interior minister said while speaking to the media after attending a drug trafficking seminar .
Lashing out at the deposed premier for “misleading the people and dividing the nation”, the minister said: “Imran is trying to malign the state institutions.”
“Strong action” would be taken against participants of the PTI long march if they attempt to come towards D-Chowk, he said, adding that the protesters could gather at F-9 Park or some other place as the apex court had already provided guidance in this regard. However, he warned of “strong action” in case of any attempt to come towards D-Chowk.
He criticised Imran’s attitude, saying that no one could negotiate with him.
On the Toshakhana case against Imran, he said that the ousted premier had been involved in the embezzlement and received an amount of around Rs260 million by selling gifts in the market.
He criticised the PTI chief for an out-of-court settlement made in a case of over Rs50 billion laundering by the previous government, as there was no clue who had signed this agreement. He said that an amount of Rs50 billion of Bahria Town was confiscated which had been transferred against the law and returned against the donation of land for Al-Qadir Trust.
To another question about the closure of roads in Islamabad, he said that D-Chowk had been closed due to the protest of farmers. He said that negotiations would be conducted with the leadership of farmers and their demands would be considered.
He said protesting farmers could be provided with an appropriate place to stage their protest. However, he added that they couldn’t be allowed to come to D-Chowk to protest.
On the law and order situation in the federal capital, he said all were equal before the law and no one would be allowed to take the law into their hands.
To a question about legislation related to the transgender persons, Sanaullah said that everything should be decided according to the religion which “guides us on all matters”.
“We are Muslims first and everything comes later. We would have to regulate our lives according to Islam and the religious scholars would be consulted on this issue.”
Addressing the seminar titled ‘High-level Consultation on Human Trafficking in Persons’ organised jointly by the Federal Investigation Agency and the United Nations Office on Drugs and Crime, the interior minister said that the incumbent government was committed to eliminate human trafficking while coordination among the federal government and provinces was imperative to eliminate it from society.
The federal minister also expressed the government’s resolve that it was taking concrete steps to end human trafficking.