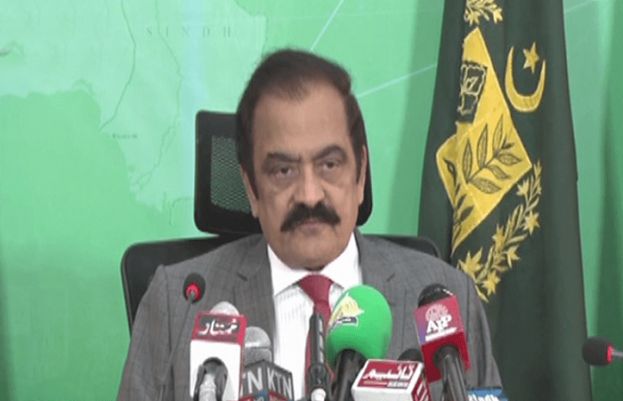 Interior Minister Rana Sanullah has advised PTI Chairman Imran Khan to postpone his party’s long march in Rawalpindi on November 26 (Friday).
“Imran Khan should have delayed this march but he is stubborn and still wants to come to Rawalpindi.
“I reviewed a meeting and all intelligence agencies have alerted me that any terrorist outfit can take advantage of this march. There is a threat to Imran himself,” he stated in a press conference in Islamabad.
Interior Minister Rana Sanaullah, in a press conference, said that he has instructed the Islamabad chief secretary and inspector general of police to provide foolproof security to PTI marchers in Rawalpindi.
“The stage should be kept bulletproof at every cost […] and entry to the stage should not only be made safe but the people on the stage should be kept an eye on as well,” he said.
The minister also discouraged people from attending the march, saying it was not a movement for “Haqeeqi Azadi but to create instability in the country”.
Interior Minister Rana Sanaullah,  told Imran to come back to the parliament so that the “country can move forward”.
“If you don’t do of this then you will be responsible for everything including inflation, economic turmoil and political turmoil. Stop being stubborn and come do politics instead,” he asserted.
Sanaullah also said that when politicians sit together, deadlocks are broken and decisions are changed.
“I’ve seen my leaders amend their decisions after arguments and discussions.”
Imran won’t get an election date from Rawalpindi
Interior Minister Rana Sanaullah has said that PTI Chairman Imran Khan won’t get a date for fresh elections from Rawalpindi.
“I will like to tell Imran Khan sahab that there is no purpose for this long march now. You say that you are coming to Rawalpindi for an election date. Imran Khan, you won’t get a date for elections now,” he said at a press conference on Friday.
“The establishment won’t get you an election date […] if someone had to give in to your blackmailing, you would have a date […] but the establishment as an institution is standing on the decision that it won’t step out of its constitutional role.”
Sanaullah further said that if Imran wanted a date for elections he should “become a politician”.
“Become a politician and meet your fellows […] meet Zardari, Maulana Fazlur Rehman, Akhtar Mengal, Khalid Magsi, Khalid Maqbool Siddiqui […] discuss the elections with them […] you can even meet Nawaz Sharif and Shehbaz Sharif, they won’t refuse,” he added.
Interior Minister Rana Sanaullah, while reviewing the overall security situation in a meeting, said the federation and its units should jointly take measures to stop “unconstitutional” steps.
According to Radio Pakistan, the minister was briefed about the prevailing situation and strategy to deal with the PTI’s march in a meeting.
The participants were informed that the administration will ensure the writ of the government and control the situation during the PTI march in Rawalpindi.
Sanaullah directed the chief secretaries to ensure that no federal employee would become a part of any illegal activity against the federation.