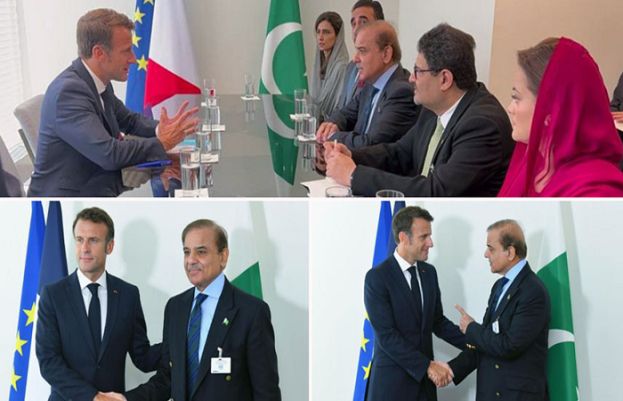 Prime Minister Shehbaz Sharif urged leaders of key European nations to enhance trade ties with Pakistan apart from seeking their continued support for the lengthy rehabilitation and expensive reconstruction phases.
He said this during meetings with leaders of European countries, including France, Spain and Austria, on Tuesday in New York on the sidelines of the 77th session of the United Nations General Assembly (UNGA).
As per media reports, in a meeting with French President Emmanuel Macron, the two leaders reviewed bilateral relations and exchanged views on regional and international issues.
Noting the importance Islamabad accords to its long-standing friendly ties with Paris, Shehbaz stressed the importance of further strengthening these relations across the trade and investment, energy, agriculture, information technology, defence and security, and higher education sectors.
Thanking France for its solidarity and immediate support for the flood-affected people in the form of tents, water pumps and a team of doctors and nurses, Shehbaz provided Macron with details of the devastation caused by the floods and the resultant dire situation in Pakistan.
Prime Minister Shehbaz Sharif also met with Spanish President Pedro Sanchez in New York on Tuesday.
After reviewing the state of bilateral exchanges and trade and investment levels, the two sides agreed to utilize the existing institutional mechanisms to fully realize the potential of bilateral relations.
Shehbaz shared details of the devastation wrought by floods across Pakistan this year due to climate-induced natural disasters and reiterated that Pakistan remained the most vulnerable to climate change despite being a negligible contributor to global carbon emissions.
He thanked Madrid for support and solidarity with Pakistan in a very difficult situation and hoped the international community would step up to help mitigate the adverse effects of the floods through active participation in the rehabilitation and reconstruction phase.