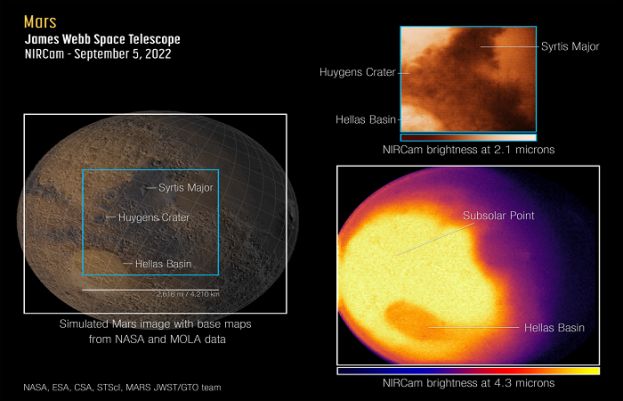 The James Webb Space Telescope has captured the first images of Earth’s celestial neighbour, Mars, and has given scientists an insight into the red planet’s atmosphere.
The images were beamed back on September 5. The new pictures give an insight into the atmosphere of Mars. As per NASA, “the Hellas Basin is a lower altitude, and thus experiences higher air pressure. That higher pressure leads to a suppression of the thermal emission”.
The spectrograph map received through the telescope shows the presence of carbon monoxide, water and the absorption of carbon dioxide. Moreover, the initial analysis of the spectrums shares information regarding dust, icy clouds, rocks, and the composition of the atmosphere.
Considering the fact that Mars is the brightest object in the night sky in terms of both visible light and infrared light, it is a challenge for the observatory as it was built to detect the extremely faint light of the most distant galaxies. However, astronomers are using special data analysis techniques to get the best results.
In the future, NASA plans to understand “regional differences across the planet and to search for trace gases in the atmosphere, including methane and hydrogen chloride” through the telescope.