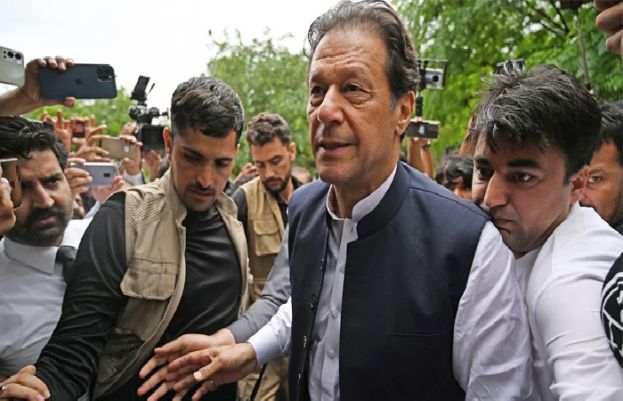 The Islamabad High Court (IHC) on Monday ordered the authorities to remove sections of the Anti-Terrorism Act (ATA) from the case against PTI Chairman Imran Khan for threatening a female judge, while announcing the verdict on plea seeking dismissal of case.
A two-member bench, headed by IHC Chief Justice (CJ) Athar Minallah had reserved the verdict on PTI’s plea earlier in the day.
Khan was booked in a case under sections of the Anti-Terrorism Act (ACT) for making threatening remarks against an additional sessions judge and senior officials of the Islamabad Police in his speech at a rally.
The party had moved the IHC to grant Khan transit bail, but the court had directed the former premier to approach an ATC as it was a terror case.
The FIR registered against Khan states that he threatened Additional Sessions Judge Zeba Chaudhry and police officers at a rally in F-9 Park to “terrorise” police officials and the judiciary.
The main aim was to prevent the police officers and judiciary from carrying out their legal obligations, states the FIR. The FIR was registered on the complaint of Magistrate Ali Javed at Islamabad’s Margalla Police Station under Section 7 of ATA.