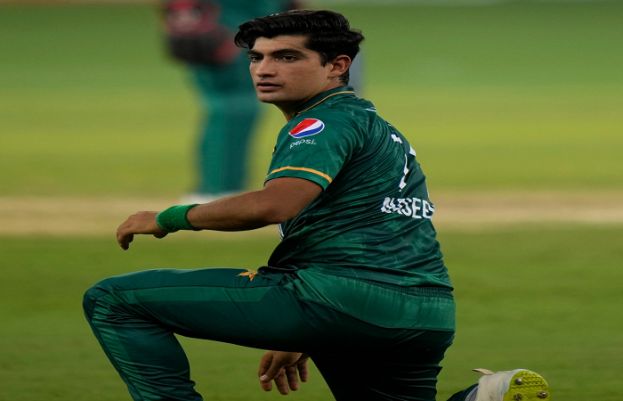 Pakistan cricket team’s fast bowler Naseem Shah is hopeful of a good contest against England in the upcoming seven-match T20I series, which begins on September 20 in Karachi.
“As a bowler, I’ve to go after every batter but it is important to work according to the team’s requirement, the wicket you take when the team needs it the most holds more value than other wickets and those are always special for me,” said the 19-year-old fast bowler.
Talking about England’s arrival in Pakistan after a gap of 17 years, Naseem said that it was a special moment for everyone and he is proud to be a part of the Pakistan team that is playing this historic series.
“It is always exciting to play against a top side on your home soil, I am hopeful of a fair contest between the two sides, we are arriving here from Asia Cup with good form, so it will be a fruitful series,” he said.
“Several England players have played in Pakistan before during PSL and they know about the conditions and opponents. They’ll play according to their strength and we’ll play according to ours. It is our condition and we know our strengths well,” said the young pacer.
Commenting on his aim as a bowler in the series, Naseem said that like any other bowler in the world, he would like to be the leading wicket-taker and man of the series here but his main target for him is to perform according to the team’s expectation and play part in making your team successful.
When asked about his back-to-back sixes to help Pakistan win against Afghanistan during the Asia Cup match, the fast bowler said that it was a nail-biting contest.
“I was just thinking of giving my best and leaving rest on Almighty. Alhamdolillah! I was successful in making my team win the match,” he said.
He, however, added that bowling is always his main focus and he doesn’t practice like batters in nets.
“My primary job in the team is as a bowler and that remains my focus, I don’t do long sessions of batting in nets like normal batters would do but I feel I must know how to add 15-20 runs towards the end especially when the team needs it, and I do practice for that in nets to keep myself prepared,” concluded the fast bowler.