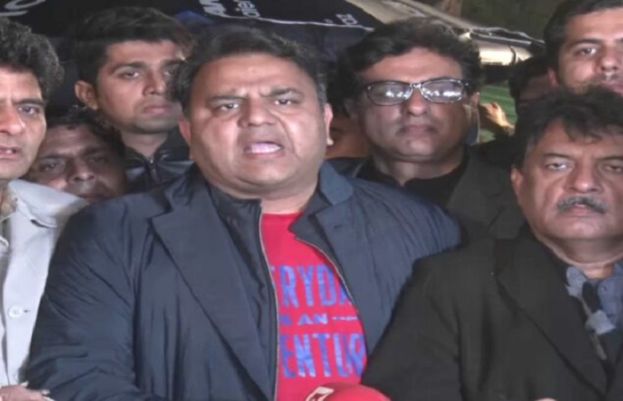 The Islamabad police on Wednesday shifted Pakistan Tehreek-e-Insaaf (PTI) leader Fawad Chaudhry from Lahore to Islamabad to present him the court of Judicial Magistrate Waqas Raja.
As per reports, the capital police requested the magistrate for physical remand of PTI leader, meanwhile the Judicial Magistrate’s Court has been closed on its time.
The lawyers of the former minister also reached Islamabad F-8 session court, citing sources.
Following the party leader’s arrest, the PTI members are likely to stage protest moreover the Lahore police prepared a list of dynamic workers and activists of the political party.
Earlier in the day, Islamabad police arrested Pakistan Tehreek-e-Insaf leader and former federal minister Fawad Chaudhry from his residence for ‘threatening’ Election Commission of Pakistan (ECP) members.
A case against Chaudhary was registered last night at the Kohsar police station in Islamabad on the complaint of Secretary of the Election Commission of Pakistan (ECP) Omer Hamid Khan.
The first information report (FIR) was lodged against him for using ‘threatening’ language against the ECP and its members.
The PTI leader has been booked under sections 153-A (promotion of enmity between groups), 506 (criminal intimidation), 505 (statement conducing to public mischief) and 124-A (sedition) of the Pakistan Penal Code.
According to the First Information Report (FIR), Fawad Chaudhry in his speech outside Imran Khan’s residence in Lahore, Fawad warned the ECP, its members and their families.
The Lahore High Court (LHC) on Wednesday summoned the inspector generals of Islamabad and Punjab police after the authorities failed to produce Pakistan Tehreek-e-Insaf (PTI) leader Fawad Chaudhry before it.
Fawad was arrested from his residence earlier today after he publicly “threatened” the members of the Election Commission of Pakistan (ECP) in a media talk outside Imran Khan’s residence in Zaman Park a day ago.
The LHC had ordered authorities to present Fawad before it in response to a petition filed by Fawad’s cousin, Nabeel Shehzad, for the “recovery” of the former federal minister.
The petitioner had filed a habeas corpus plea and urged the court to “recover” the PTI leader after the Islamabad police acquired his transitory remand. He also appealed to the court to stop any illegal action against the PTI leader.
Justice Tariq Saleem Sheikh heard the plea and ordered the authorities to present the PTI leader before the court by 1:30pm. The time was later extended to 2pm, but the authorities failed to produce Fawad before LHC.