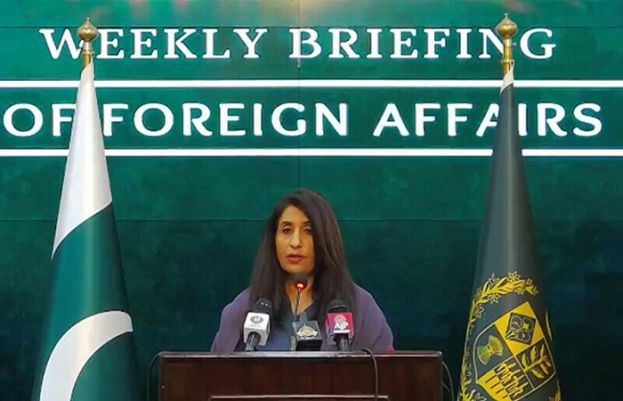 The Foreign Office (FO) on Thursday “strongly condemned” the terrorist attack from across the Pakistan-Iran border in Balochistan’s Panjgur district on Wednesday evening in which four security personnel were martyred.
During a weekly press briefing today, FO Spokesperson Mumtaz Zahra Baloch said, “Pakistan strongly condemns the terrorist attack from across the Iran border.”
According to the Inter-Services Public Relations (ISPR) , militants used Iranian soil to “target a convoy of security forces patrolling along the border” yesterday. Following the attack, Iran had been asked to hunt down the terrorists on their side, the ISPR had said.
Baloch asserted today, “Terrorists used the territory of Iran. We hope that Iran would take an action against the responsible factors.”
She said: “We strongly commit that our territory will not be used for undertaking cross-border attacks in Iran and we expect the same from Iran.”
The spokesperson further said that both countries have “exemplary brotherly relations”.
Separately, Baloch announced that the foreign minister would be visiting Uzbekistan’s capital Tashkent on Jan 25.
Referring to the recent clarification on the premier’s statement regarding talks with India, she said, “Pakistan condemns India’s atrocities in Kashmir on every level.”
The spokesperson added, “Pakistan wants better relations with all neighbouring countries including India [but] India should create an environment that makes it clear that it is not involved in terrorism.”
Baloch also said Foreign Affairs Secretary Dr Asad Majeed Khan was currently on an official trip to Belgium.
She added that a parliamentary delegation from Belgium was also paying an important visit to Pakistan during which, it would visit the Parliament House, Lahore and the flood-affected areas of Pakistan.