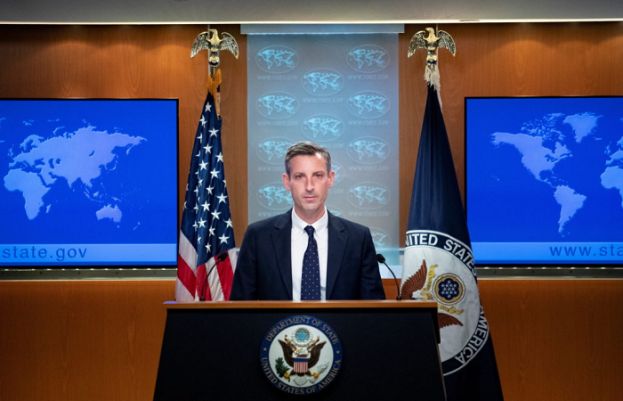 The United States has said it is aware of financial difficulties of Pakistan and wants to see the country in an economically sustainable position.
State Department Spokesperson Ned Price expressed these views during a press briefing while commenting on the financial crisis in Pakistan and the US government’s efforts to help the country.
Depleting forex reserves and worsening political crisis has put the Shehhbaz Sharif-led government in Islamabad in a difficult position as the International Monetary Fund’s (IMF) conditions proving a bitter pill for the administration but there’s no way out other than implementing the reforms demanded by the lender.
When asked what suggestions Washington has for Islamabad to overcome these financial challenges and the discussions going on between the two governments, Ned Price said these conversations with “our Pakistani partners often do entail technical issues. Often times these are addressed between the Department of the Treasury and our Pakistani partners”.
He added that “Pakistan’s macroeconomic stability is a topic of conversation between the Department of State and our counterparts, the White House, the Treasury Department, among others.”
He was also asked whether the US is planning to give some debt relief as the country’s forex reserve plunged to a historic low of $4.3 billion — enough for three weeks of imports.
To this, the spokesperson said, “So this is a challenge that we are attuned to. I know that Pakistan has been working with the International Monetary Fund (IMF), and with international financial institutions. We want to see Pakistan in an economically sustainable position. Those conversations, as I understand it, are ongoing.”
The US official added that they are supportive where they can be of their Pakistani partners, but ultimately these are conversations between Pakistan and international financial institutions.
It is important to note that the US government and other friendly nations have advised Pakistan to introduce reforms as sought by the international institutions to achieve economic growth and have tied monetary assistance with the revival of the IMF programme that has been stalled since months.