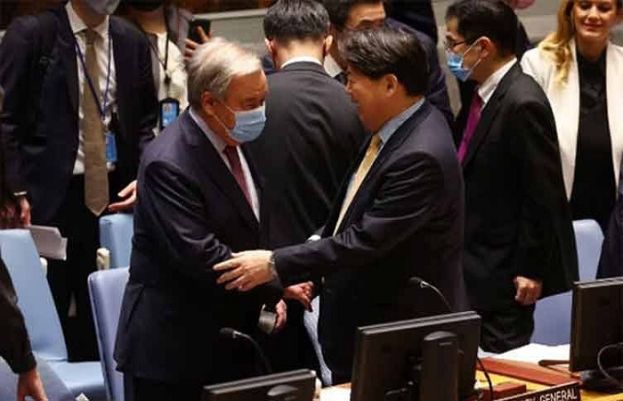 UN Secretary-General Antonio Guterres said on Thursday that the onus is on North Korea to return to talks aimed at getting Pyongyang to give up its nuclear weapons program, a rebuttal of China’s demand that the United States needs to show flexibility.
North Korea has been subject to UN sanctions since 2006 over its nuclear and ballistic missile programs. So-called six-party denuclearization talks – between North Korea, South Korea, China, the United States, Russia and Japan – stalled in 2009.
Talks between North Korean leader Kim Jong Un and then-US President Donald Trump in 2018 and 2019 also failed. China and Russia since pushed for UN sanctions to be eased for humanitarian purposes and to entice Pyongyang back to talks.
“The unlawful nuclear weapons programme being pursued by the Democratic People’s Republic of Korea is a clear and present danger, driving risks and geopolitical tensions to new heights,” Guterres told a Security Council meeting on the rule of law, chaired by Japan’s Foreign Minister Yoshimasa Hayashi.
“The onus is on the DPRK to comply with its international obligations and return to the negotiating table,” said Guterres, using North Korea s formal name.
North Korea’s mission to the United Nations in New York did not immediately respond to a request for comment on Guterres remarks. But in November North Korea’s foreign minister accused Guterres of siding with the United States and failing to maintain impartiality and objectivity.
China said last year that the key to solving the issue of North Korea’s ballistic missile and nuclear programs is in the United States hands, urging Washington to show “more sincerity and flexibility” if it wants a breakthrough.
The United States has said that its up to North Korea to decide whether it will engage in talks on its nuclear weapons program. North Korea has rebuffed US entreaties for diplomacy since President Joe Biden succeeded Trump in January 2021.
North Korea last year resumed testing intercontinental ballistic missiles for the first time since 2017. It also prepared to reopen its nuclear test site, raising the prospect of a new nuclear bomb test for the first time since 2017.
Guterres also told the U.N. Security Council on Thursday that attacks on the rights of women and girls by the Taliban-led administration was “creating gender-based apartheid” in Afghanistan.
The Islamist Taliban-led administration, which seized power in August 2021, announced a ban on female aid workers on Dec. 24. It followed a ban imposed days earlier on women attending universities. Girls were stopped from attending high school last March.