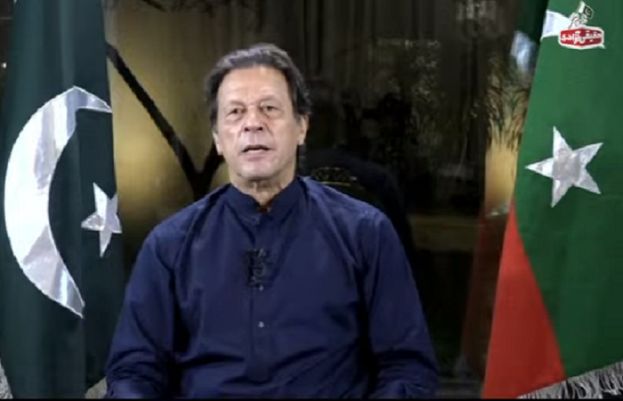 As per the Election Commission of Pakistan’s (ECP) order, a trial court in Islamabad sent a notice to PTI Chairman Imran Khan for tomorrow in the trial opened against him in the Toshakhana reference.
The notice was sent after the court received a copy of the reference ordering criminal proceedings against Khan.
Additional Sessions Judge Zafar Iqbal will hear the reference tomorrow (Tuesday) filed against Khan for being involved in corrupt practices.
In reference, Khan can be sentenced to three-year imprisonment and fine can also be imposed on him.
Last month, ECP, in a consensus verdict in Toshakana reference, disqualified the former prime minister and ruled that the PTI chief was no more a member of the National Assembly.
The ECP stated that the PTI chief had submitted a false affidavit and was found involved in corrupt practices under Article 63(1)(p).
“As a sequel to our abovementioned findings, facts available on record and keeping in view the argument of learned counsel for parties herein, we are of the considered opinion that the Respondent has become disqualified under Article 63(1)(p) of the Constitution read with Section 137,167 and 173 of the Elections Act,2017, consequently he ceases to be a member of the National Assembly of Pakistan and his seat has become vacant accordingly,” the ECP order stated.
In the verdict, ECP also declared that Khan had made “false statements and incorrect declarations, therefore he has also committed the offence of corrupt practices defined under Sections 167 and 173 of the Elections Act,2017”.
It added that the offence was, punishable under Section 174 of the Elections Act, 2017 and directed legal proceedings and follow-up action under Section 190(2) of the Elections Act.