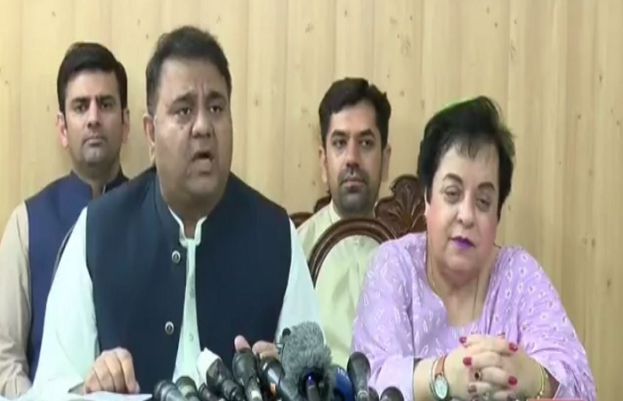 Pakistan Tehreek-e-Insaf (PTI) leaders were on the offensive on Wednesday as they criticised Dubai-based businessman Umar Farooq Zahoor’s claims regarding buying the Toshakhana gifts given to deposed prime minister Imran Khan during his tenure.
The charges of misuse of the Toshakhana (gift depository) against former prime minister Imran Khan took an unusual turn a day earlier after Zahoor come to the fore and claimed that he had bought some of the state gifts, including an expensive Graff wristwatch worth at least Rs2 billion, from Farah Gogi and Shahzad Akbar.
In an interview with a private TV channel, Zahoor said that he had bought the expensive items, gifted to the PTI chief by Saudi Crown Prince Mohammad bin Salman, for $2 million.
He had further alleged that the adviser to the former premier on accountability Shahzad Akbar had contacted him in 2019 to sell watches, rings, and other gifts. He said that he also has evidence to substantiate the claims he was making.
The businessman had gone on to allege that he was later blackmailed and fake cases of money laundering were registered against him by the Federal Investigation Agency (FIA) at Akbar’s behest after he refused to listen to the demands made by his former wife Sophia Mirza.
“Farah Khan herself brought the gifts to my office in Dubai and told me that the items had been gifted to Imran Khan by the Saudi crown prince,” he claimed, adding that he was convinced to buy them after he confirmed through his sources.
PTI leaders Fawad Chaudhry, Shireen Mazari and Zulfi Bukhari while addressing a press conference denounced Zahoor’s claims and asserted that there had been no foul play on the part of the PTI chief.
Shireen Mazari on the occasion also questioned why Imran was scrutinised so strictly while the Toshakhana details of other political leaders and public servants were not probed.
“My question is: Is there any record of the gifts the military leaders receive when they go on official visits,” she stressed.