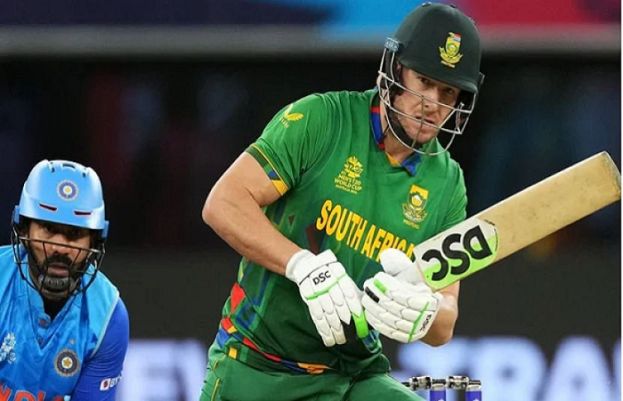 David Miller hit 59 not out as South Africa beat India by five wickets at the Twenty20 World Cup in Perth on Sunday to brighten their semi-finals hopes.
South Africa kept down India to 133-9 and then reached their target with two balls to spare largely due to a 76-run stand between Aiden Markram (52) and Miller. It put South Africa top of Group 2 on five points, one ahead of India and Bangladesh.
South Africa restrict India to 133-9South Africa’s Lungi Ngidi led a fiery pace onslaught to keep India to 133-9 at the Twenty20 World Cup on Sunday, despite an attacking half-century by Suryakumar Yadav.
India won the toss and chose to bat in their bid for a third straight win but the South African quicks made life difficult on a fast and bouncy Perth pitch.
Yadav’s 40-ball 68, laced with six fours and three sixes, helped India recover from 49-5.
Ngidi returned figures of 4-29 off his four overs, ably supported by fellow fast bowler Wayne Parnell who finished with 3-15 after starting the innings with a T20 rarity — a maiden over.
Skipper Rohit Sharma hit a six and a four before being caught and bowled by Ngidi, who returned to the side as South Africa’s only change.
He got KL Rahul next for nine but the big wicket came when Ngidi sent back Virat Kohli for 12, caught in the deep, to silence an Indian-dominated crowd.
Unable to handle the extra bounce on the Perth track, the Indians lost half their side for 49 inside nine overs.
Kagiso Rabada took a stunning catch at long leg to see the back of danger man Hardik Pandya for Ngidi’s fourth wicket.
Yadav hit back with a couple of sixes as he rebuilt the innings with Dinesh Karthik.
The in-form Yadav, who hit an unbeaten 51 against the Netherlands in their previous win, even smashed Ngidi for a huge six over fine leg to bring alive the fans. He then reached his fifty off 30 balls with another four.
Karthik tried to join the attack but fell to Parnell, who broke the stand which had been worth 52 and the same bowler finally dismissed Yadav for 68 in the 19th over.
The Proteas need 134 runs to win and stay unbeaten in the tournament after a washout in their opening match against Zimbabwe and a big win against Bangladesh.
Playing XIsIndia: Rohit Sharma (capt), KL Rahul, Virat Kohli, Suryakumar Yadav, Hardik Pandya, Dinesh Karthik, Deepak Hooda, Ravichandran Ashwin, Mohammad Shami, Bhuvneshwar Kumar, Arshdeep Singh.
South Africa: Quinton de Kock, Temba Bavuma (capt), Rilee Rossouw, Aiden Markram, David Miller, Tristan Stubbs, Wayne Parnell, Keshav Maharaj, Kagiso Rabada, Anrich Nortje, Lungi Ngidi.