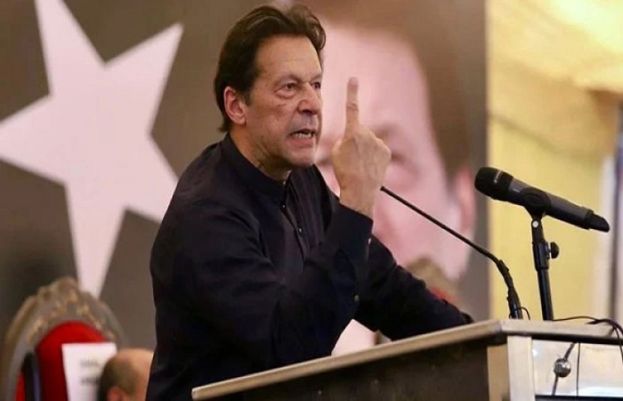 Former prime minister and PTI chairman Imran Khan on Monday responded to the show-cause notice issued to him by the Islamabad High Court (IHC) in contempt proceedings, offering to “take back” his controversial remarks regarding additional district and sessions judge Zeba Chaudhry.
Imran, through his attorney, claimed of not being aware at the time of passing the remarks that Chaudhry — who had approved the remand of his chief of staff Shahbaz Gill in a sedition case and earned the PTI chief’s wrath — was a judicial officer, adding that he instead had the “misconception” that she was an executive magistrate performing administrative duties for the federal government.
Earlier this month, a three-member IHC bench, headed by Justice Mohsin Akhtar Kayani and also comprising Justice Babar Sattar and Justice Miangul Hassan Aurangzeb, issued a show-cause notice to Imran and initiated contempt proceedings against him for “undermining the integrity and credibility of the judicial system in the eyes of public at large”.
The court had also summoned him on August 31.
“The respondent [Imran] submits with humility that if the words he uttered is regarded as inappropriate, he is willing to take them back,” the PTI chief stated in his provisional reply submitted in the high court today.
Imran’s counsel maintained that the ex-premier had mistaken the additional sessions judge for the magistrate.
“It was in this misconception that she was referred to a magistrate,” it said, adding that the PTI chief had no intention of saying anything against the judicial officer.
“It is submitted that the respondent had no motive (ill-will) behind the said speech or remarks, nor were those directed specifically towards the judicial officer.”
It argued that after seeing visuals of the physical torture and hearing about the sexual abuse on Shahbaz Gill during custody, the PTI chief had been disturbed. “It was neither intended to obstruct the course of justice as the order for remand had already been issued.
On Imran’s behalf, his counsel said that fair comment and criticism was desirable for the administration of justice and hence should be allowed.
He also contended that the deputy registrar of the court had completely “misconceived the law and his own powers” by writing a note to the IHC and demanding contempt proceedings against Imran.
The PTI chief’s response in court also said that he had not committed any contempt of court, rather his words at the F-9 rally were taken out “selectively” and blown “out of context” to give an impression that he wanted to take things in his hands.
“On the contrary, it was the legal right of every citizen to complain about the conduct/misconduct of a judge or any other public functionary in accordance with the law,” it maintained, adding that the “gender debate” regarding Imran’s speech was initiated by some journalists and politicians.
The counsel claimed that Imran’s words “aap sab sharam karain” was taken in a different context and regrettably viewed as contemptuous.
“It is submitted with respect that such words were uttered spontaneously without any previous motive or malice only to emphasise that the rule of law should be strictly followed in the matter of Shahbaz Gill by the authorities.”
Furthermore, Imran called for a “judicial inquiry” into the matter of Gill’s torture and government crackdown on journalists “for the protection of the fundamental rights of the citizens”.
His response added that the PTI chief did not believe in hurting the honourable judges and categorically clarified that it was not his intent.
Subsequently, it prayed that the show-cause notice against him be discharged and contempt proceedings be disposed of.